Bleeding America By A Thousand Cuts

PLEASE, read and watch These before reading the report Bleeding America by a Thousand Cuts:

When do too many become too much? Why must the world’s miseries become America’s responsibilities?  At what point, does the immigrant line end?

In the past month, emotional writers around the United States tell us that we must accept and care for the 14,000-strong immigrant caravan chugging toward our southern border. More open-borders activists plan to fight the military in order to allow the migrants into the United States. The Catholic Church encourages its flock to violate our borders at every level. The Pope, standing behind the tall walls of the Vatican, scolds us for building a wall on the Mexican border. High powered leaders, like Joe Biden, Nancy Pelosi, Charles Schumer, Barack Obama, Diane Feinstein, Michael Bennet and more Congressional Critters, press for no borders for America. They feel we should dissolve our borders and open up our country to unlimited immigration.

Catholic Charities, Lutheran Charities, Muslim Charities and Jewish Charities encourage refugees, equip them and plant them in thousands of cities across America annually: all on your taxes.  Congress aids and abets them.

An average of 300,000 pregnant women from all over the world violate America’s borders to birth their anchor babies annually. Those babies cost you, the American taxpayer, billions over the decades, if not into the trillions of dollars.  Congress does nothing to stop them.

Congress mandates 50,000 diversity visas annually to give a “Golden Ticket” to third world poor people to arrive in America with an apartment, food stamps, automobile and cash for as long as they choose.  All on your taxpayer dollar!  To sober you to this Congressional boondoggle, 14 million third world poor sign up for that Golden Ticket to America every year.

If given a free ticket on a plane to America, 100,000,000 (million) to as high as 500,000,000 (million) citizens of the world would gladly vacate their hellish countries to come to America, Canada and Europe.  The United Nations reports that 68,000,000 (million) refugees languish around the world at this date.  That number will exceed 100 million within 10 years. In India, 60 percent of Indians do not enjoy access to a toilet or shower. No wonder they chain-migrate into America like a human monsoon.   (Source: Indian Express)

As it is, 1,200,000 (million) legal immigrant refugees flow into the United States annually. That’s 100,000 every thirty days.  Once established, they chain-migrate their relatives from 196 different countries.

On the illegal side, the U.S. Border Patrol reports that 1,500 illegal alien refugees jump our borders successfully 24/7.  That adds up to 500,000 illegal aliens that break into America annually. (Source: Dr. Steve Camarota, Illegal Alien Flow into the USA, www.cis.org)

Bleeding heart Amanda Cater wrote a letter to the Bozeman Montana paper pleading on behalf of the Central American caravan of immigrants about to invade America’s borders. She said, “The people seeking refuge are a very small percentage of our 325 million people.  We must let them into our country.”

Dr. Paul Nachman, a population expert in Montana, responded to Cater, “We already admit over one million legal immigrants yearly, causing substantial stress in our national life.  (Think: stagnant wages, galloping housing prices, schools blitzed with influxes of non-English-speaking pupils, jammed highways, welfare burdens, inter-ethnic strife, ….)  Meanwhile, in recent years, the Gallup organization has done worldwide polls revealing that 160 million adults want to move to the U.S., and the number would be much bigger when we count their children.”

Above all of this invasion, our national debt stands at $21 trillion.  Anybody see a problem with that?

Additionally, we face a fractured and fragmented Congress seething to disembowel President Trump and all Republicans.  We face 240 Sanctuary Cities supporting all illegal aliens living within their boundaries.  We face millions of employers cheating our tax codes by hiring illegals for a fraction of a living wage.

And yet, we’re expected to care for the rest of the world’s desperately poor, disenfranchised and sick.  At the same time, those same third world refugees produce a net gain of 80,000,000 (million) new babies annually around the world.

Thus, the line of refugees never ends.  Watch this five-minute video to see what it looks like.

In a five minute astoundingly simple yet brilliant video, “Immigration, Poverty, and Gum Balls”, Roy Beck, director of www.numbersusa.ORG, graphically illustrates the impact of overpopulation.  Take five minutes to see for yourself.

Watch this 10-minute video to see where our country is headed.

“Immigration by the numbers—off the chart” by Roy Beck

This 10-minute demonstration shows Americans the results of unending mass immigration on the quality of life and sustainability for future generations: in a few words, “Mind boggling!”  www.NumbersUSA.org 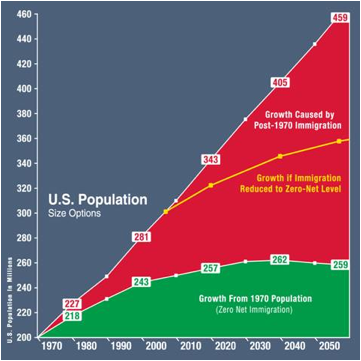 The burning question begs to be asked:  do you want to bequeath this kind of a civilization to your kids?

If you don’t, you need to take action. If you don’t care, don’t take action and let history tell the tale how the United States, the most successful country in the world, devolved into a desperately poor, overpopulated and overwhelmed civilization.

Ironically, at a future date, American citizens discovered they could not immigrate to any other country in the world to save themselves.

(Permission to republish this population graph by Roy Beck, www.NumbersUSA.org)

pls. note: each day some THOUSANDS of emails are filling my emailaccount. BUT THIS  report is so important, that i read and blogged it here  – pls. read this wealth with Patience, it is not a simple Food!